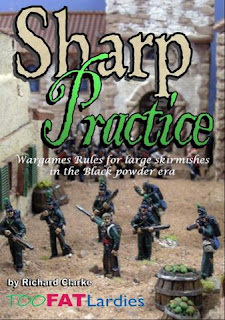 Hello again. Picking up from yesterday's post we got up bright and early and hit the miniatures wing of the Con. We found an interesting sounding game titled “Revenge of Napoleon in the Caribbean” and decided to play. It was a four on four skirmish game using the Sharpe Practice rule set from Two Fat Lardies. I never played the rule set before, but the judge running the game had a very nice set of tables which included most of what we needed for the game. The rule set is also extremely intuitive and fun to play…especially if you like rolling gobs of D6s.
The scenario centered on a small, but elite, British unit and Haitian irregulars guarding a small fort outside a much larger walled city and a French attack force with three Infantry companies, Dragoons and Voltigeurs attacking. The French force had take the walls of the city for a major victory and the small fort for a minor victory. The British had to stop both of those objectives. The British had secret set-up, so we, as the French Force, felt we should just rush the center fort with all of our Infantry while the Dragoons and Voltigeurs screened. Our plan soon unfolded and it was clear that we not only chose the correct course of action but that the British force was badly placed. They only had one company in the fort while most of there troops were in the buildings surrounding the fort unable to aid in it’s defense as they were tied down by shots from our light infantry and my roving band of Dragoons. Speaking of which, in one of the more memorable moments of the game, approximately 10 British sailors attempted reach the fort after leaving the safety of city walls crossing a wide open area in-between the two. As they were half way, my Dragoons slammed into them and began to hack them to pieces. They were quickly shattered as a fighting force, and at about the same time, our infantry was just about to pour into the fort after breaking down the fort’s doors. The British players knew all was lost at that point as we would have secured at least the minor objective and it would have been impossible to retake it. They threw in the towel. 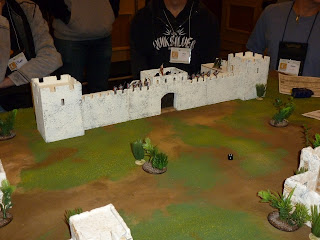 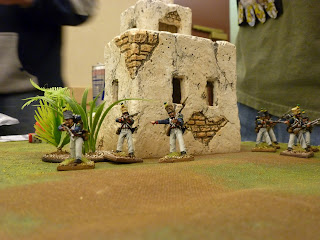 My voltigeurs begining to screen the left flank. 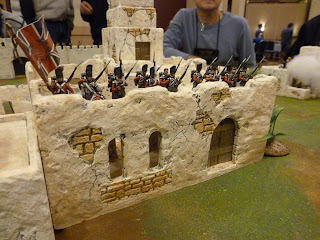 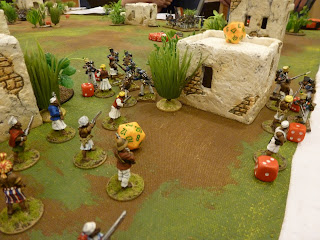 My voltigeurs mix it up with some Haitian irregulars. 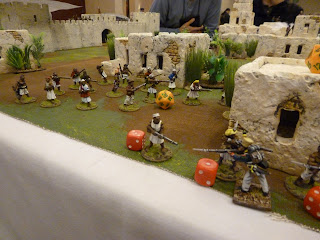 They turned out to be of better quality and quantity, but all I needed to do was buy the center force time to take the fort. 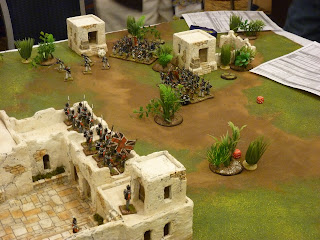 Our Center moves into place. 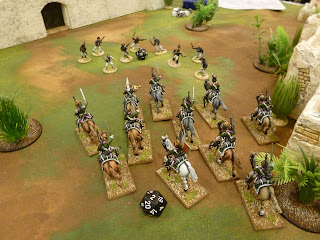 Fresh meat, My Dragoon run down sailors in the open. 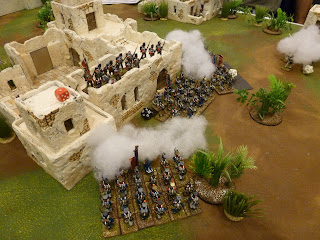 Withering fire is brought to bear on the lone British unit just as the British capitulate.

My Friend, Dylan was awarded a KublaCon pin for coming up with our plan of attack, I was given a very nice box set of Perry miniatures for the most kills, and my other friend, Eric and another player received Kubla-bucks which could be redeemed for prizes elsewhere. I really liked the game and I can’t wait to start painting these miniatures. Perhaps I will host a Peninsula War campaign using the Sharp Practice rules and my new Perry miniatures in the future? 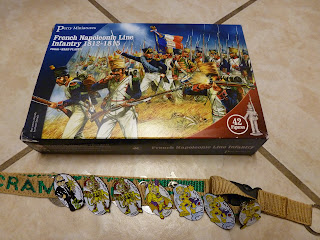 After the miniatures game, all of us got together and played a couple more rounds of Risk Legacy. Later that afternoon, a couple of our group had to go home early, so I played a few other board games and chilled taking in all of the wonderful games people were playing and managed to get in a few more favorites before I could not hold my eyes open any longer that night. I figured I should not push it as my game, “Escape from the Rock”, was in the morning the following day. More on that tomorrow. 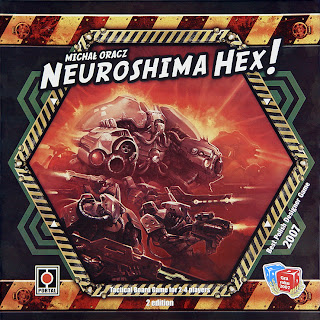 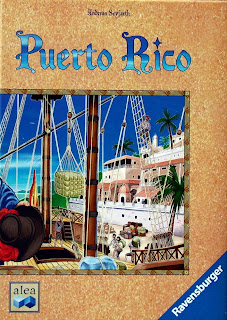 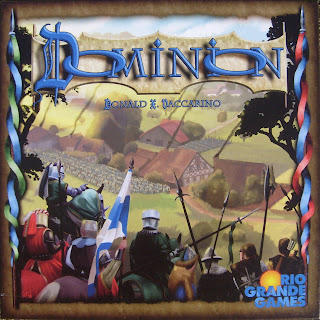 Dominion
Posted by Reinwood99 at 22:20 No comments: 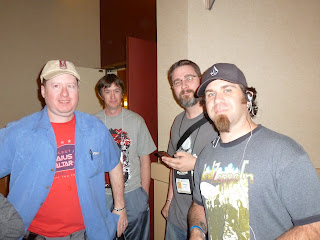 Hello and thanks for looking in. I hope everyone’s summer is off to a great start whether that’s by starting a new miniatures project, finishing a campaign, or just taking time to enjoy the weather. Well another KublaCon has come and gone kicking off my summer and I have to say it was a very good time with four of my good pals and many of the Con’s regulars I look forward to seeing every year. I would have loved to have had a better build up leading up to the Con through posts here, but it was not to be for a variety of reasons. Suffice it to say, I will still post the pictures of the game components and a full AAR in the near future. Until then please enjoy the following series of picture and their captions to get a flavor for how the con went for me. 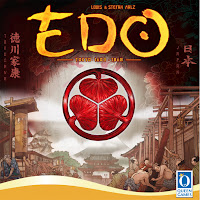 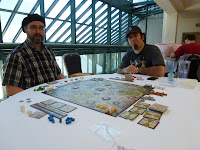 We got the Con started on Friday with a new board game called Edo. This game owes its creation to Kickstarter. Kickstarter is a crowd funding site where hundreds of people fund creative projects through small payments. Apparently Edo was quickly funded and went to press rapidly. I found the game challenging but easy to learn. 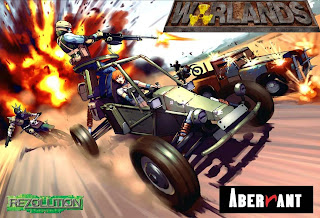 We moved on to Warlands and fought not only another scavenger band intent on killing all of us and looting our bodies and vehicles, but also mobs of the undead. Each team had 8 vehicles and a small amount of troops in which to dismount and secure provisions and fight zombies. This game was expertly designed and run by our friend Rene. It was a close game but our team won in the end and I received two vehicles for my efforts. Link 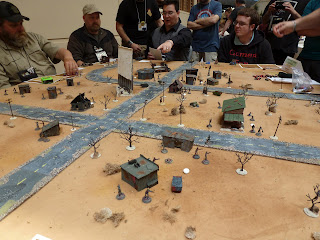 The main area of the game. 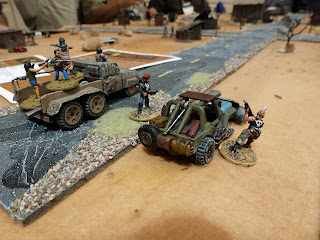 My team prepairs to enter the fray. 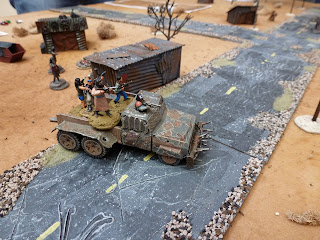 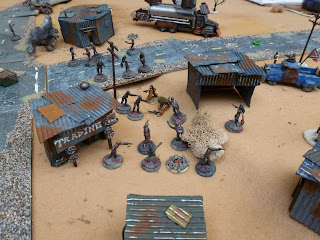 Zombies close in on some enemy troops left behind. 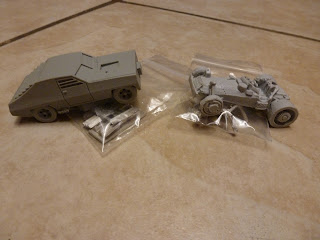 Two new cars to add to the collection.


The next game we played was a pirate game where six players had to take their five man teams into the jungle and recue several other pirates from cannibals. This game used a modified version of Legends of the High Seas as its rule set and was run by our friend Rich. It was a fast and bloody game as the teams soon turned on each other when they realized there was treasure to be had. My friend Don and I fought each other to the bitter end...that is his end as I killed his entire team. Another player fought and successfully defeated the cannibal king only to be killed off by two other players, our friend Rene stayed out of most of the mischief and just collected treasure taking the win by only a few points. It was a very fun and light hearted game. 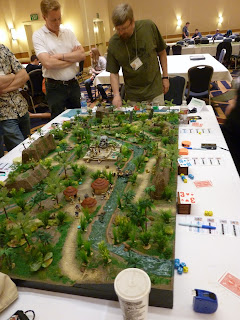 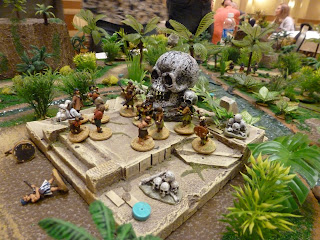 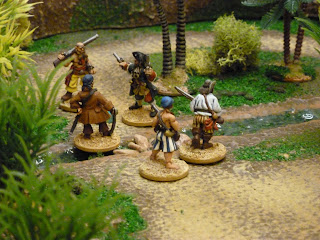 A pirate team moves out. 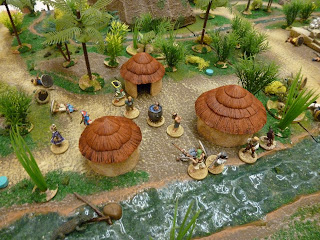 Don and I square off over loot and prisoners.

Finally, we capped off the first night of KublaCon with a another new board game called Risk: Legacy. Risk Legacy starts out a lot like regular Risk, but with every game the board changes, more powers are granted to each winning player and ultimately new types of units. We managed to play 4 games over the course of the weekend. I can't wait to get togeather again an play. 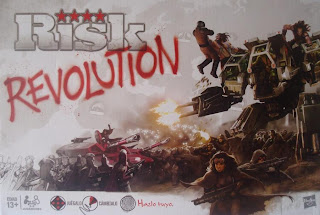 We turned in after a couple of games of Risk. More on Saturday coming tomorrow.